At least 32 people have died and 66 are injured after two trains crashed head on in Egypt.

Three passenger cars flipped over and some 36 ambulances were sent to the scene in the province of Sohag, health authorities confirmed.

Images show two trains completely derailed over a body of water. Video footage from the scene shows a number of passengers trapped under the wreckage, and people can be seen attempting to pull them out. 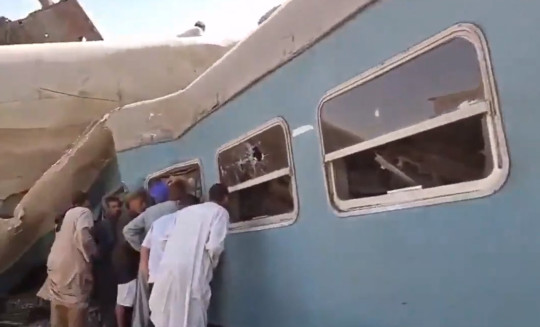 Some victims seemed to be unconscious, while others were bleeding. Bystanders carried bodies, laying them out on the ground near the site of the crash.

Egypt’s railway system has a history of badly maintained equipment and poor management.

In 2016, at least 51 people were killed when two commuter trains collided near Cairo. In 2017, two passenger trains crash just outside the Mediterranean port city of Alexandria, killing 43. In that year alone, 1,793 train accidents took place across the country.

Continue Reading
You may also like...
Related Topics:Train clash